The Brezza private estate, with vineyards in Barolo dating back to 1885, takes its name from Giacomo Brezza, who with his father Antonio bottled the first wine of the estate in 1910.

The estate lies very close to the centre of Barolo, immersed in the vineyards, as is the nearby Hotel and Restaurant, also property of the Brezza family.

The original part of the cellar, built in the traditional vaulted style, with exposed brick, was once the area where all cellar operations took place; it is now reserved for the maturation of wine in oak.

The largest part of the cellar, which is of more recent construction, is divided into two cellars, the first used for the primary fermentation in temperature-controlled stainless steel tanks. The second cellar is utilised for malolactic fermentation and other operations within the cellar. The cellar for the bottle-aging is located underground where a constant temperature and suitable humidity level are naturally maintained.

The total production is approximately 100.000 bottles per year, produced from grapes sourced only from estate vineyards. 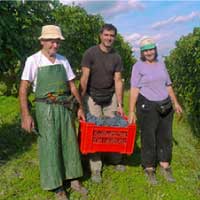 The estate Brezza Giacomo e Figli sells the largest proportion of its wines, some 60%, to foreign markets: Australia, Austria, Canada, Denmark, England, France, Ireland, Germany, Japan, Netherlands, Singapore, Spain, Switzerland, and the United States. The remaining percentage is sold to wine bars and restaurants in Italy, and directly from the winery.